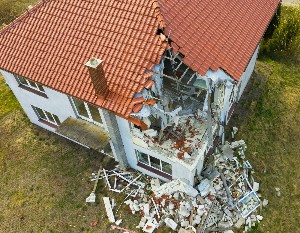 Many homeowners in Florida are more than familiar with roof damage from storms. Others may have roofs that have escaped storm damage but have led to other problems because they have become worn with age. Although people may not be aware, most homeowners insurance policies will cover water damage caused by a worn roof that has not been damaged by a storm.

Homeowners' insurance policies will generally exclude roof replacements if the roof was not damaged by wind, hail or other associated problems. However, most policies, while excluding roofs that are simply worn from aging, will cover losses caused by the roof’s condition. This can include water damage inside of the home caused by an old, worn-out roof. Insurance companies may, however, inspect the homes for which they carry policies and if a roof is left in a very worn condition, the company may opt to cancel the policy.

Coverage to replace roofs damaged by storms, including wind and hail, should be available to most homeowners with insurance policies. Homeowners whose roofs suffer damage in a storm may run into a problem if the insurance company’s inspector determines the roof’s damage was instead primarily due to its worn-out condition.

People in Florida normally pay a lot to insure their homes with the idea that carrying such insurance can provide protection while also giving them peace of mind. It can be disconcerting when a person whose roof has suffered storm damage is denied coverage. In the event that occurs, an attorney who is familiar with such matters may be able to help. It may also be a good idea for policyholders to review their policies with both their insurance agent as well as their attorney in order to make certain they have sufficient coverage in the event damage occurs.

Has Your Home Insurance Company Denied Or Undervalued Your Property Damage Claim In Florida?

If your insurance company is dragging their feet regarding your property damage claim you should speak with an experienced insurance claim lawyer as soon as possible. Please contact us online or call our Tampa, Florida law office directly at 800.451.6786 to schedule your free consultation. We help Florida residents just like you fight the big insurance companies who fail to abide by their own policies. Remember, we work on a contingent basis, meaning you don't pay us anything until we win your case.

Guaranteed Call Back Within 24 Hours

Our office is located in Tampa, but we assist frustrated commercial and residential property owners all over the State of Florida. If your insurance company isn’t treating you fairly, leave the fighting to us.

Cast Iron Pipes – The Hidden Time Bomb in Your Plumbing

In this valuable guide, our Florida residential property insurance attorney explains how the failure of cast iron plumbing could cause damage to your home.